Paris, flagship of innovation in Europe

Recently ranked as the second startup ecosystem in Europe *, Paris is asserting itself as a stronghold for innovation. Between 350 and 400 startups currently benefit from workspaces offered by existing incubators, the city having set a target of 100,000 m2 of office space for 670 startups hosted by the end of 2014. The ambition is clear for Jean-Louis Missika, deputy mayor in charge of innovation at the town hall of Paris: to make the city a French-style Silicon Valley.

The ecosystem of business incubators and accelerators has already developed well in the Paris region. At the instigation of the public authorities first of all, with around twenty incubators which have been created since 2000 by the town hall of Paris, the Ile-de-France region and higher education establishments. And driven by the private sector, with accelerators such as Camping (Silicon Sentier incubator) specializing in business acceleration, or Spark (Microsoft incubator) more focused on technological acceleration. In all, around fifteen private incubators have sprung up in Paris. For 2014, the declared project of the public authorities is the creation of “digital districts”, another model based on the regrouping of start-ups, research centers and universities.

This dynamism can be explained by the serious assets available to the Paris region, starting with an over-educated and proactive human capital: the Paris region thus has the highest concentration of graduates and the longest weekly working hours in Europe. The quality of its R&D is also praised: its 80,000 researchers present in more than 850 laboratories in Ile-de-France represent the first capacity of researchers in Europe.

Regarding the digital sector, the dynamism of the city is even more noticeable. It lists 24,000 companies in the ICT sector, including 1,800 startups. These figures allow it to be the leading employment pool for ICT in Europe with 423,000 estimated jobs. Paris also welcomes 20,000 students per year in fields related to NICT.

Map of the Parisian startup ecosystem: 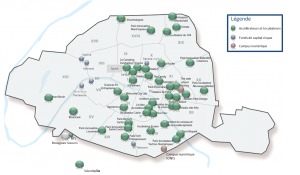 Bouygues Telecom 4G Challenge: the results and the REMINIZ winner

CEA-LETI and INES welcomed a delegation from the Bouygues group, Bouygues Telecom Initiatives and start-ups from its program